It may be safe to assume that everyone knows who Milli Vanilli is, however for those that may not know they were the brilliant scammer's that took the music industry for a ride and got busted in 1990. LOL 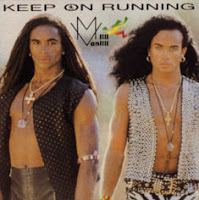 Milli Vanilli will always be known for their lip-synching. TODAY IN 1992 the final verdict came down from the court announcing that a $3 refund would be given to those that could prove they purchased the album prior to November, 1990. WOW - a whopping whole three dollars? Whatup with that and then also - who the heck keeps the receipts whey they purchase music?? I just had to go look and check out what the price of a CD actually was in 1990 and drum roll.... a whopping 5 - 6 dollars. As far as the refund is concerned: Come on! I am curious how many folks requested a refund - did you? I can say that I personally didn't go for the refund. For starters I was not made aware that getting money back was an option. For ender's (lol) I wouldn't have went for the cash anyways. I actually really liked the music.

CHECK THIS TV AD OUT - DID ANY OF YOU SEE THIS? History, that is what this is!! 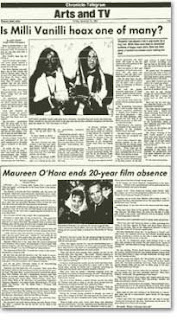 Okay now, this just blows me away. Arista Records provides a proposal for settlement because at over 14 million albums sold they guestimate that it would cost them in the neighborhood of $25,000,000. Who really gives a hoot what it WOULD cost you, is the record company any better than Rob Pilatus or Fav Morvan (the lip-syncher's)?? I could go on about that one for days and days! I was a paralegal and I can't even begin to express how passionate I am about the law; especially when it comes to music. Right Netty...get on with the point!....So Arista comes back with a proposal whereby they will provide a $3 refund on FUTURE PURCHASES to anyone who had bought a Milli Vanilli compact disk, $2 for a tape or record, or $1 for a single. Einsteins! Well, for all of the blatant faults that transpire within the justice system, the proposal was denied on the basis that the consumer would have to spend more money on another product to get a refund on the product that should not have been sold to begin with. Atta go, whoever that Judge was! 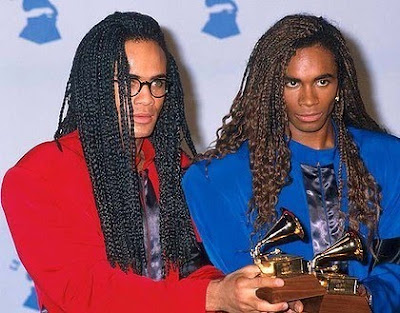 Milli Vanilli's 14 million Album sales was a result of the hit songs "Blame it on the Rain" and "Girl, You Know It's True,". Indeed, 14 million albums and 30 million singles later they ware awarded the BEST NEW ARTIST GRAMMY in 1989. he he he - talk about egg on your face for the Grammy Association hey? The Grammy Association retracted the award in 1990 when they were made aware that they actually granted a Grammy to some Lip Syncher's. Oh, to be a fly on the wall of that Board Room when they all got together to discuss the best way to go about eating Crow. I say this because in my opinion it makes up for all of those other Artists that get snubbed by the almighty Grammy's. Okay, enough said on slamming the Grammy's it will come back to haunt me after I accept mine! lol...

Just when you thought it was over: Universal Pictures announced that they are developing the Milli Vinilli Movie. It will be based on the rise and fall of the Grammy award winning Lip Synchers.
The screenwriter for Catch Me If You Can (Tom Hanks movie - LOVE THEM ALL! - serious Tom Hans Fan!!!) is writing the script and will be directing the movie. Fab Morvan (one of the pretty-boy lip syncher's) will be on set as a consultant.  I wonder if Arista Records or the Grammy Association will have something to say or have a rep there to consult. lol unlikely.  This really could be a goldmine for you Arista Records and the Grammy Association!  My take on it, call the movie 'Blame it on the Rain (pun intended)', cast the amazing Justin Bieber (everything turns to gold when he looks at it!) as the struggling Artist that NEVER made it because of the hype and notoriety of Milli Vinilli - but gets his big shot after the demise of his only competition. What do you think? You know, all jokes aside; there is a reason Milli Vanilli sold 14 million Albums and 30 million Singles - the music was fantastic and the eye candy didn't hurt either; hence why the whole thang went down to begin with. I still quite enjoy parts of the Album. Maybe it is nostalgic or maybe it was just great music?! Hard to call a farce great though!!