MUZIK NEWZ AGO2DAY - NETTY MAC at the RISING STAR SEMI-FINALS - Well my friends we did not advance to the Final round. I made sure that I went over to the Judges to inquire where I was at in the selection process and it boils down to our songs were not Country Radio material. There were 3 judges: Country 105 Radio station Scott Philips, Universal Music - Greg Blackmore and Entertainer Sarah Beth Keeley.

I wasn't able to chat with Scott Phillips. Sarah said that it was a tough decision, but they ended up choosing Jodie because she was more country and I would most definitely agree. 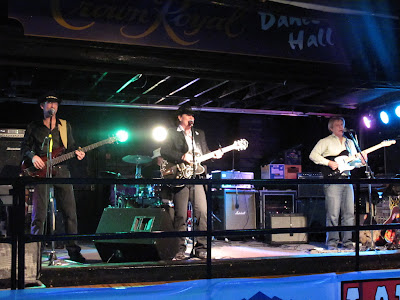 My chat with Greg Blackmore of Universal Records was a hoot! What an interesting character he is! Greg said that both Jodie and I were "Real". I like that observation. He said that we both looked him in the eye when we were singing and we were comfortable with ourselves and the stage. He said that my music was not Country enough to advance me to Finals but that I should keep doing what I am doing. That it is all about the stage and performing and to keep doing what you are doing and having fun. Oh yah!

I asked him how he does it in the music industry in consideration that the Industry is turning upside down with the technological advances and the 99 cent song. He told me a story that he was working on Johnny Cash's Hurt Album and trying to get radio to play it, but it was too "emotional". Hmmm emotional and Country Music? Okay then. Greg was very passionate when he was telling his story....He couldn't get Johnny Cash played on the Radio at a time when Kid Rock and Cheryl Crow were number one on the charts with Picture. He had a good point though: "You are a country radio station and you won't play Johnny Cash, but you are overplaying Kid Rock?!". This is the epitome of the radio stations out there.

While we were on the subject of Radio stations, I said that I find it very interesting that even if I did accommodate their definition of Country and went on to win the Finals, at the end of the day Country 105 wouldn't play my CD because they are not allowed to. They can only play songs provided by the Labels. That is a joke AND THAT is exactly why very few people even listen to mainstream radio anymore.

I (like many of my peers and network) listen to youtube or satellite radio stations so that I can hear a diverse sound. The inside the 'safe' box of the radio song plays gets so redundant when listening to most radio stations today......when is the last time you listened to a Radio Station for 5 hours in a row or better yet 2 days in a row. I think you would be blown away by the number of repeat songs and even different songs but by the repeat same Artist. Kudo's to those radio stations such as CKUA that support Indie Artists and don't throw one genre into a box and allocate worthyness based on some generic definition of the genre.

It will be interesting to see how long the local radio stations will survive in the face of ipods, social networking and satellite stations where you can actually now choose your playlist! How wonderful is that? Sit down for an hour or two, build your play lists and BAM! One of those features that I like, is that you can choose Indie Artists and get to hear what is out there.

Contests are a great opportunity to network and make some fans (which we did - yay!) and also it is fantastic experience to sing under the scrutiny of a panel of judges. I am very comfortable on stage, so it is an excellent opportunity to take me outside my comfort zone so that when I do end up in that Music exec office and they are considering me to tour with Taylor Swift that I kick it right then and there. I will be able to do that all because I entered into contests and experienced singing under pressure.

I really enjoyed myself last night and will definitely enter for a 5th time next year; who knows what will happen in Country Radio 365 days from now! Thank you so much for everyone that came out to support us - you ROCK! You are the true attestation to Netty Mac Music. Your fanship is what it is all about... Debbie Ledene points at the Rising Star poster on the wall and says you know why you didn't win right? I said no. She then says: "Because you are ALREADY a Star, you are not on the Rise girlfriend." That meant alot to me, I laughed; but it really did mean the world to me. xo

I AM Country infused with 50's Rock 'n Roll (or as Greg from Universal said: kinda Rockabillly; but unique) and I will continue to take my art out to the world and if it does not work out - I will still have my CD for when I am 90 and in my rocking chair and I can say I WENT FOR IT!