MUZIK NEWZ AGO2DAY - JUDY GARLAND - TODAY in 2001 - The Recording Industry Association of America conducted a poll from music fans to vote on the Song of the Century. Judy Garlands song "Over The Rainbow" won! Of all the songs out there, The notorious Wizard of Oz song wins? Of all the songs out there and music of so many genres, it is refreshing that such a beautiful song wins the song of the Century. What is very funny about the song and the movie is that it was actually deleted from the scent because the producer thought it "slowed" the movie. LOL LOL Good call on the part of the Associate Producer to talk the Producer into putting the song back in! 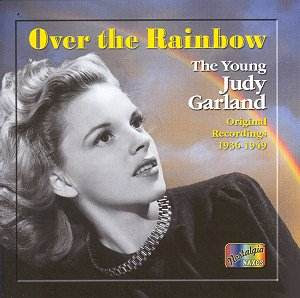 "Over The Rainbow" was not only song of the century, it also earned the American Film Institute's award for Greatest Movie Song of All Time over 100 years. The song also was also picked along with "White Christmas" by Irving Berlin and was adopted as the symbol of the United States by American troops in World War II. A United States Stamp was also issued in 2005.

Who doesn't like this song or relate to it. Okay, by today's standards it may seem a bit 'hokey", but at the end of the day one has to focus on the lyrics. Puts a bounce in my bum every time I hear it. To me it is the epitome of being positive and looking at a new day with new eyes and focusing on it being HUGE. THAT my friends is what it is all about isn't it? We all have the ability to find our rainbows and we all have obstacles that thwart us from getting there. Just sing the song right? Well, if it were that easy I would be singing with Judy Garland every day. Unfortunately the message is the easy part, finding that Rainbow takes tenacity and focus on the pot of gold AND the ability to stay positive when the road disappears at times. I love this song and the movie and encourage you to watch The Wizard of Oz if you have not already and to watch it again for a new time.

Posted by Netty Mac at Saturday, March 12, 2011
Email ThisBlogThis!Share to TwitterShare to FacebookShare to Pinterest