MUZIK NEWZ AGO2DAY - COLONEL TOM PARKER - 1955, Elvis Presley signed a management contract with Colonel Tom Parker. Now why would Elvis go with a manager that previously managed a troupe of dancing chickens? This was when The Colonel managed the 'Great Parker Pony Circus' with one of the acts a troupe of dancing chickens. Quite the Resume right? Actually The Colonel had a very impressive Resume. 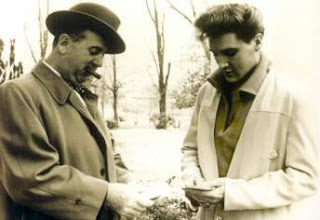 So why do we call him the Colonel? Not for any spectacular reason that's for sure. He received the Louisiana State Militia rank of colonel form a former country singer Governor as a return favor for election work. So BIG DEAL! He went by "Colonel" Thomas Andrew "Tom" Parker however he was born Andreas Cornelis ("Dries") van Kuijk. The Colonel is logical I guess.

The Colonels music Resume evolved in 1938 when he became Gene Austins' Promoter and he was darn good at it. Then he started as a Field Agent for a Local Animal Shelter to raise funds and awareness. This is where he honed in on his craft to seek out talent and promote them. As a rookie he must have had some tenacity because he booked stars like Minnie Pearl and Eddie Arnold. He obviously knew he found his thang because he started searching out talent for himself instead of the Animal Shelter. I think that I would LOVE that job. Travel around, check out the local talent - find the next big thang. I love live music so much that I can definitely see myself starting a label to facilitate ensuring my findings get to the next level.

The Colonel became Eddie Arnold's full-time manager in 1945. This is where he learned the ropes in booking live tours and television appearances and in my opinion the most important skill: picking out and securing Hit Songs. Arnold ended up firing the Colonel in 1953 because of the Colonel's increased activity with Hank Snow.

The Colonel was very skilled in not only finding new talent, but more importantly promoting that new talent. On October 20, 1955 the Colonel became Elvis Presley's official Manager. By November 21 the Colonel had persuaded RCA to buy Elvis out from Sun for a whopping $40,000. In 1956 Elvis recorded his first RCA single "Heartbreak Hotel" and as it has been said a million times: "Elvis Presley graduated from rumor to bona-fide recording Star.

The Colonel took Elvis for the ride of his life as far as I was ever concerned. They started out at about 10% commission and near the end there were times when Parker was raking in 50%! Fifty percent? That is just robbery when you think about how astronomical the amounts must have been once "The KING" was booking shows. I couldn't stand Colonel Tom Parker when I was growing up, he really did get a bad rap. However his brilliance in the music industry when it came to finding talent and most important promoting that talent was for obvious reasons the best thing that ever happened to the sweet introverted extremely shy Elvis Presley. Tom Parker took Elvis to the International Stage in a day and age where this just did not happen. Unbelievable character. I have so many mixed feelings for the Colonel, I guess maturity has kicked in. As I write today about him, I find I have less animosity for the not-so-kind things he did to Elvis (namely stealing his money!). I am able to now see that he was indeed a very talented man with great skills that took one of my Hero's to the International and KINGDOM stage! I love the quote by Elvis in reference to the Colonel: "I don't think I would have been very big with another man. Because he's a very smart man." I have to concur.

Oh my, a thought just hit me....I wonder what my life would be like if a Colonel Tom Parker walked through the door right now. You know, after all of the tears and animosity I had for the Colonel and his dealings with Elvis; I think I would give him 75%! It is not about the money for me, it is ALL ABOUT THAT STAGE and watching the crowd with the bounce in their bum and singing my songs back to me!