MUZIK NEWZ Ago2daY - 1963. 'Summer Holiday' from the movie 'Summer Holiday' by Cliff Richard and the Shadows became a number one single in the UK. Sir Cliff Richard, yes that's right (same thang as Elton John) was born Oct 14, 1940 and his real name was Harry Rodger Webb. Kinda sounds like Cliff Richard hey? lol Cliff sold over 260 million records around the globe as is best described as a musician, performer, actor and most of all; English Pop Star. What most folks don't know is that Cliff was also an entrepreneur and a philanthropist. Cliff's career over 52 years has brought him HUNDREDS of Gold and Platinum records from over 130 singles. Both Cliff Richard and Elvis Presley both hold the title as being the only Artists to ever hold the UK charts for the six decades from when it was formed: 1950's to 2000. 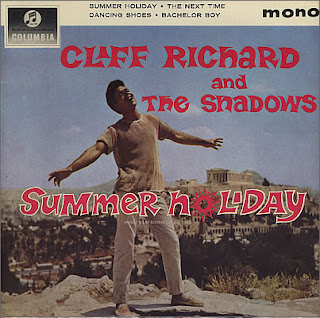 The plot:, 4 young men acquire a Double-Decker bus, they convert it into a Holiday Caravan and they proceed on a road-trip throughout Europe with plans to get to France. They are joined by 4 young girlz (including a runaway singer that was being hunted down by her Agent and Mother). I have seen the movie twice and will tell you that if you didn't enjoy (or shall I say appreciate - LOL) the Elvis Movies, you would not make it through this movie. I personally LOVE LOVE the Elvis movies (however not really having anything to do with the movies themselves - merely to watch the King), so I do like the Summer Holiday movie.

When looking at Cliff Richard and Elvis Presley you really won't find many differences. They are both heart-throb poor actors that could make the girls scream with a mere glance. In my humble opinion, if it were not for Elvis Cliff likely would have stormed the Western Hemisphere and had the same stature as Elvis. They truly were mirrors of each other when you put them side by side; in far too many ways. It is uncanny to analyze the two, especially when you compare movies such as Summer Holiday and Jailhouse Rock. Filled with extremely poor acting, very poor plots and UNBELIEVABLY FANTASTIC MUSIC! lol Love Love LOVE watching both Cliff and Elvis, they have charm and charisma that NOT one artist of the last 4 decades even comes close to having.

In 1996 Cliff Richards was Knighted - the FIRST rock star to be knighted that is. FYI Knighthood time-line, 1997 - Paul McCartney, 1998 Mick Jagger and Tom Jones...

I am surprised by the number of people that have not heard of Cliff Richard. He is just as sexy and talented vocally as Elvis, however he can act just s smidgen better than Elvis. lol I guess that doesn't say very much now does it? Cliff is 70 years old and STILL rockin it out on stage! Seriously you say? Oh yah!! Unreal and very difficult for me to wrap my brain around that one!!!!! Kudo's to you Mr. Richard for livin' the dream.

Check out Cliff at these sites: