MUZIK NEWZ AGO2DAY - RICKY NELSON - March 13, 1961 - Ricky Nelson recorded 'Travelin' Man'. (Here is the YouTube Vid: http://www.youtube.com/watch?v=0janfcZ8LUw) 'Travelin' Man' became his second number one hit next to 'Poor Little Fool' in '58. Ricky was born: Eric Hilliard Nelson (May 8, 1940 – December 31, 1985). His career started in 1949 as Ricky playing himself in the radio sitcom show Ozzie and Harriot. Ricky's career was very diverse. In addition to receiving a Golden Globe Nomination for Most Promising Newcomer for his role in the movie Rio Bravo, he was able to hit the Billboard Charts with 53 songs between 1957 and 1973 with NINETEEN top ten hits. It is no surprise then that he was inducted into the Rock and Roll Hall of Fame in 1987. 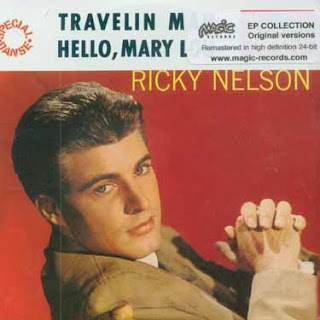 I grew up listening to Ricky Nelson and can tell you that to this day; his voice just takes a hold of me when I hear him sing. I would have to say it has a great deal to do with his choice in songs as well, but to me his voice is angelic, soothing, comforting...like an old friend.

Ricky has a quote that makes me giggle right from the tummy as I take myself back to the day and age when he said it: "Anyone who knocks rock 'n' roll either doesn't understand it, or is prejudiced against it, or is just plain square." LOL "square" indeed. It is just this attitude that I write my music. Ricky had a HUGE influence on my music which is best described as Country Infused with 50's Rock 'n Roll. Or as a new fan recently wrote: "OMG its total Rock and Roll Country, where do I get tickets?". I love it and I do have to say that it was FANTASTIC to have someone else label what I believe to be MY music.

I don't have any Ricky Nelson songs in my Set Lists. Hmmm....now that is just sick and wrong! Which song (NOT a Ballad) should I add to our show (Of course I will jack them up and NettyFY them?

Okay now so check this out - Ricky Nelson has a NEW album! lol Imagine that. Again, you know you had talent when you can release records long after you have passed on. The Album includes all of his ballads and I can assure you that I will be purchasing this little Gem as soon as possible. www.rickynelson.com - check it out - great web design and what a fantastic walk down memory land for all Ricky Nelson Fans.