Today in 2006, music distribution history was made. Shakira Isabel Mebarak Ripoll was rolling out her single 'Hips Don't Lie" in the format of mobile download for Verizon customers ONLY. That's right, you couldn't actually purchase the song, the only way to get it was to download it on your mobile phone. This started many trends in digital distribution and in my opinion this concept has completely turned the music industry upside down on its head! 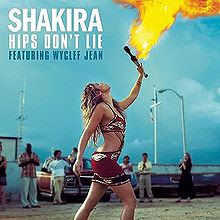 Shakira was the biggest thing since sliced bread in the early 1990's in Columbia and Latin America. Folks would be surprised to also know that this multidimensional hot sex symbol was not only a singer, songwriter, dancer, musician, but is also a record producer and a philanthropist. This gal is not just another pretty face, she is very talented on many levels in many areas. 'Hips Don't Lie" was her first number one hit in the United states and more notably was charted at number one in over 55 countries! The song is also currently ranked as one of the top thirty songs of all time in consideration that it has sold over 12 million copies. Have you heard the song? I really do like it, but to hit the number one charts? It is my humble opinion that a song like this hits this level of stature when it is chosen as this song was for the 2010 FIFA World Cup. Nice score Shakira!!

The music industry is changing at warp speed; this is not newz to us. HOWEVER, how balzy for Shakira to release this song only to Verizon subscribers as a mobile download only? Scary state of the union really. It reminds me how folks when ballistic when Garth Brooks released only to Walmart - as if Music wasn't commercial enough already. lol It is what it IS and I am watching very closely and taking a ton of notes for when I release my album.

Here is the vid:
http://www.youtube.com/watch?v=-56MFdYSbks